Students from the Aura CDT were invited to a RenewableUK parliamentary reception on the future of the offshore wind workforce as part of ‘UK Wind Week 2021’ in the Houses of Parliament. The event – “Meet the Future Wind Workforce” took place in the Members Dining Room of the House of Commons on Wednesday 27 October. 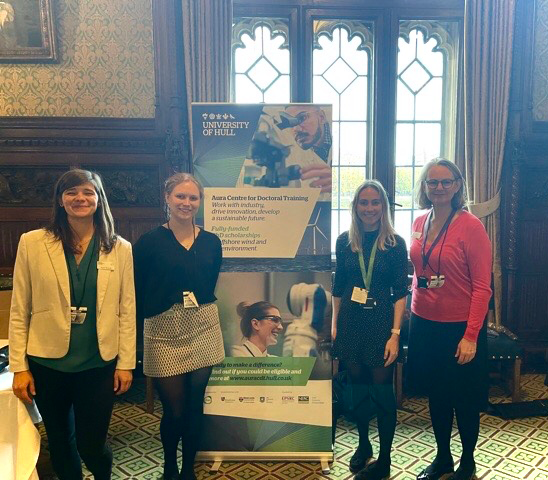 Rachael Keslake and Jordan Burgess, both Aura CDT Cohort 1 students, were invited by RenewableUK to join a University of Hull delegation, which included Aura Director, Louise Smith, NERC Research Fellow in Offshore Wind, Dr Agota Mockute and the University’s Chancellor. They were welcomed to the event by the representative for Hull North, the Right Honorable Diana Johnson MP. Also present were leading lights of the offshore wind industry, including Andrew Elmes of Siemens Gamesa Renewable Energy as well as various MPs.

Rachael Keslake was delighted to join the delegation and said of the experience:

’The trip was really insightful and provided an excellent networking opportunity with the people who will make up the future workforce of the wind industry in the UK. Two real highlights were meeting Diana Johnson, the MP for Kingston upon Hull North and the Chancellor of the University of Hull, Baroness Bottomley of Nettlestone.’